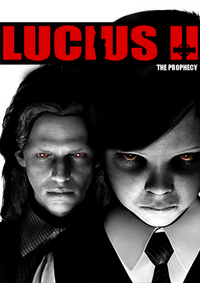 Lucius II: The Prophecy is a 2015 psychological horror stealth video game developed by Shiver Games. The game takes place following the events of the first game and sees Lucius exploring both St. Benedict Memorial Hospital and a small town named Ludlow in order to fulfill his prophecy of being the antichrist while racing to stop Isaac, another antichrist, from stopping him.

Unlike the first entry in the Lucius series, Lucius II allows players to freely roam around the game world, orchestrating deadly traps in any way they see fit as opposed to the linear restrictions of the original title. Reception, both critical and from various users on the video game platform Steam, was mixed-negative. Criticism was mostly aimed at the faulty AI and glitches, which broke the game at times and devalued its open-ended nature. Its sequel and the last entry in the Lucius series, Lucius III was released on December 13th, 2018.

Trying to tackle criticisms levied at the original, Lucius II is far more open-ended than its predecessor. Although the objectives rarely ever have more than one solution, the environment surrounding those objectives is free for the player to roam around in and interact with. Each level is filled with NPCs that the player can kill at their leisure. Murder is done by either interacting with the environment, poisoning food items, using supernatural powers (such as Telekinesis or Mind Control) to manipulate the environment or kill multiple people using tools only accessible through the powers. Killing will grant the player points in order to level up and obtain supernatural powers. Additionally, each level has hidden bobbleheads in the form of a devil that will also grant the players points to level up their powers. While wandering around the environment, players can find three different types of liquid. Water allows a current of electricity to flow in any way the player chooses, while gasoline helps spread fires, and green slippery liquid allows players to create slip traps. The player can also find combinable objects (e.g. Donuts and poison to make Poisoned Donuts) to make combined objects.

Each environment is split-up into two categories: normal and restricted. While the player can wander around normal areas unscratched, restricted areas will force the player to either kill the guards blocking their way or sneak around them. While interacting in normal areas, the player has to be cautious with how they act around guards. Doing any suspicious activities will cause the guards the chase after the player and, if the player is caught, arrest them. If a player is arrested -- in or out of restricted areas -- they will be able to stun the guard arresting them for a brief amount of time. This provides the player with ample time to run away or attack their pursuer, stopping them from being a problem.

After finishing each level, the player will be assigned a grade based on how their playstyle was. The more dangerous scenarios they pull off, the higher their rank will be.

Following the events of the first game, Lucius Wagner (now a 7-year-old) is taken to St. Benedict Memorial Hospital as the adults fear the acts of brutal violence witnessed at the Dante Manor have left him traumatized. Detective McGuffin, still piecing together the Dante Manor case, finally realizes that Lucius was behind it. He is then visited by Lucifer, who persuades McGuffin into further helping Lucius by telling him that it's all "part of God's plan".

After six months without a single visit from Lucifer, Lucius's powers start to wane until they mysteriously disappear. His fears of abandonment suddenly vanish when he gets to urge to attack a nun, which results in him being assigned to shock therapy. Just as he is about to be zapped for the first time, he manages to regain his strength, instantaneously killing the doctors performing shock therapy on him.

Lucius makes his way down the hospital's floors, picking off the staff, visiting dead or mentally unstable patients who used to be his followers prior to attacking the nun, and killing the nun by smothering her with a pillow as she sleeps. While continuing to make his way through the hospital, Lucius finds out that he's not the only son of the devil and that another antichrist, Isaac, is making quick moves in the nearby town of Ludlow. Making his way to the bottom, Lucius discovers that Charles Wagner (his "father" and last target during his Dante Manor days) survived, quickly killing him in order to help regain more of his powers.

Lucius and McGuffin quickly make their way to Ludlow to find that Isaac is trying to sound the trumpets of revelation and has already managed to sound the first one by managing to burn the cornfields. Trying to catch up, McGuffin drives Lucius to a water plant where they drop pesticides into the water, causing the third trumpet to sound right as Isaac gets the second one. The duo then proceeds to shut down a power plant in order to cause the fourth trumpet to ring.

In order to cause the fifth trumpet to ring, Lucius frees Locusts from a nearby facility. Following this, Lucius finds Isaac torturing some townfolk using his powers. He exploits his aversion to salt by throwing a can of salt at him and returns to Ludlow. By this point, the National Guard has arrived to respond to the chaos caused, initiating martial law and forcing the civilians to evacuate. As four of the guards represent the sixth trumpet, Lucius kills them. Lucius initiates a search for an angel that will sound the seventh trumpet but, during the process, finds a resurrected Isaac. Using a nearby shotgun, he once again defeats him.

Lucifer arrives to give Lucius the Sacred Scroll, which will cause further chaos when opened. McGuffin arrives with a hijacked bus and picks up Lucius, setting up the events for Lucius III.

(As an easter egg, the game's developers and Lucifer are on the bus. The player can kill them if they choose to, but this has no effect on the plot)

In a recent August 2015 update, an extras option was added that appears after first playthrough. It includes the ability to:

The game is separated into a tutorial, two Chapters (each consisting of 5 levels) and a short epilogue.

In the Dream Again, We Learn[edit | edit source]

The tutorial teaches Lucius how to use the new gameplay mechanics introduced in this game.

This chapter takes place in the St. Benedict Memorial Hospital.

This chapter takes place in Ludlow.

Gameplay is limited to murdering the developers and Lucifer.

Lucius II holds a Metacritic score of 48 based on scores by 10 separate critics and a Mixed status on Steam based on 1,075 User Reviews. Jonathan Irwin of Hooked Games was the most positive about it, referring to it as a "guilty pleasure". The most common criticism of Lucius II was the AI, which broke the game for some. Adam Smith, writing for Rock Paper Shotgun, referred to the game's objectives as "(...)irritating and aimless". The game ranked #8 on YouTuber RabidLuigi's Worst of 2015 list.

Add a photo to this gallery
Retrieved from "https://lucius.fandom.com/wiki/Lucius_II:_The_Prophecy?oldid=8124"
Community content is available under CC-BY-SA unless otherwise noted.